The Long Road to Equality – Women in Science

Women in science also experience similar problems with those in humanities and it would be great to have a dialogue with each other. Because we teach the history of science as part of humanities, and we highlight how invisible women have been in STEM. So essentially, we advocate women’s empowerment in what we do. Perhaps they can show support for women in humanities, too.

Science needs women. It is those who in this challenging period, since the beginning of the Covid-19 pandemic have carried the greatest burden, and with their efforts, knowledge, and experience they made significant contributions to the development of vaccines and treatments, aimed at preventing the spread of this dangerous disease. Scientists, doctors, medical staff, teachers, mothers. They all deserve our respect and admiration, and they are an inspiration to young women around the world.

March 8th, had that fake smile again this year. Most men have been carrying bouquets and chocolates. Parties and celebrations have been planned, all to pay tribute to colleagues, wives, sisters, and mothers.

But, if the attention is sincere, why are we connecting irony with this holiday every year?!

The answer lies in the UNESCO Science Report, which details how thirty-three percent of researchers are women, even though they represent forty-five and fifty-five percent of students at the Bachelor’s and Master’s levels of study respectively. The percent of forty-four goes to those enrolled in current Ph.D. programs. While seventy percent of health and social care workers are women, they are paid eleven percent less than their male counterparts.
NYIHSS has recognized women’s contributions in science since the beginnings. But the assembly of scholars and professionals engaged in this institution want to achieve more.

Their teams are here to break stereotypes and join the fight to defeat discrimination against women and girls in science in the most direct ways.
Academic Fellow of the NYIHSS, Professor Pelin Kadercan is a native of Istanbul, Turkey, and a historian of modern Europe and the Middle East. She is an educator, researcher, mentor, writer, and organizer experienced in critical areas of academic and student affairs.

At the beginning of this interview, Prof. Kadercan reminds us that in the United States, women did not have the right to vote until the passage of the Nineteenth Amendment, brought as legislation in 1920. Women were not considered equal with men since the early 20th century. Without any power, their talent being oppressed within the confines of a household. Therefore, they were not able to talk about injustice, were not able to tell truths, were not able to tell their history.

“Yes, we have come a long way today. But we have been excluded from the story of humanity’s creative expression for so long that it is difficult to catch up. Some so many women achieved success after long struggles and they have opened the way for us to become who we are, and are becoming now, but we still have to fight sexism, classism, and racism to have our art be seen. We are more visible thanks to the political achievements of the previous century, but not yet equal to men. Women are interested in reflecting on how they look at the world, but the boy’s clubs are not necessarily interested in seeing how women view the world. Given the unequal distribution of wealth in society, and the commercial art industry servicing the appetites of the wealthy, a patriarchal mindset still prevails. Therefore, the change is slow. It remains to be seen but NFT spaces seem to be promising for women artists because as a digital marketplace tool, it could increase visibility especially if you are, for example, a single mom with three kids and want to promote your artwork in alternative ways”. 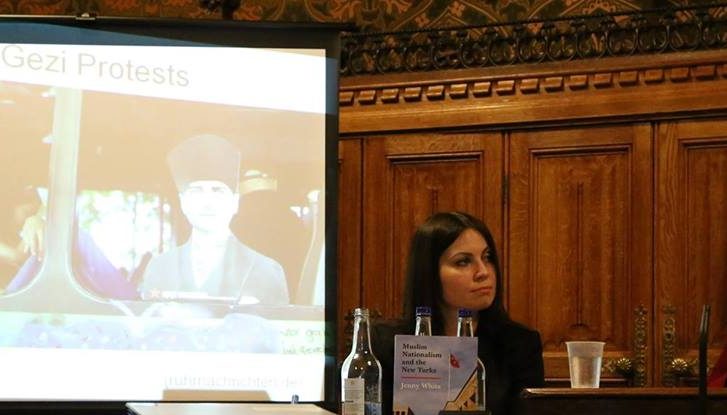 “When President Recep Tayyip Erdogan appointed the rector of the prestigious Bogazici University in Istanbul, Turkey, and denounced LGBT students this February, hundreds of students and faculty members protested. The government and its allies inflamed the situation by branding the protestors ‘terrorists’, accusing them of anarchy. Bogazici alumni abroad have also been organizing to give support to the protests in Istanbul. As a Bogazici alumna myself, I have attended several committee meetings and forums in the US since February. I can tell that a majority of the members of the committees are women. Stacey Abrams’s name came up often during our forums. Many women said that we could learn so much from her, especially in terms of how to do grassroots organizing. She has proved to be a positive role model among international women. Kamala Harris is also very inspiring to women in the Middle East. I’ve seen many women sharing their success stories on social media. Those two women have a tremendous impact on all women, but especially women of color in the United States”.

When we talk about challenges, they don’t just come from men at work. Prof. Kadercan recently interviewed women and learned that many of them spent a lot of time arguing with their families because they did not have support for anything they wanted to do in their lives.

“Women are still perceived as the member of a family responsible for staying home and raising kids. A woman could have utilized that time better by just focusing on her work. I think that although things have improved in the last hundred years, I do believe that there are forces that do want to remove rights from women in the same way they do from LGBTQ or blacks and/or people of color. That is scary. I think that this is all more complicated than it seems. We cannot say that women are liberated in the west in the same way that we cannot say racism doesn’t exist. As for the Middle East, it is more difficult for a woman to take on different roles and be visible. Of course, the Middle East is not homogenous. There are various cultures in the Middle East, but generally speaking, patriarchy prevails”.

Research within humanities is in decline. Mainstream media, social and tech platforms are growing, leaving a strong imprint on society, especially the younger population. Having this in mind, we asked Prof. Kadercan if she could define ways on how we could make arts and humanities more visible, especially today when we are facing such an unprecedented crisis. Furthermore, we also have an interest in defining stances on which women should engage further, in what capacity, and what should be our next goal?

“When you look at most of the courses that the humanities programs are offering such as the ‘18th Century British Literature’, ‘Shakespearean Poetry’, or ‘The Western Civilization’, they still predominantly represent the white male Eurocentric worldview. Besides, most American institutions are composed of white [male] faculty. Maybe it is time to be critical of humanities from within and incorporate more diverse courses, and hire faculty members who represent different colors. I think that women in any profession should not be too comfortable with the status quo”.

If the solutions for further social regulation are to be transferred to areas of research and arts, instead of politics, is this a good time to talk more about the importance of the “woman’s work”, and how we can regulate or promote their potentials in the future?

“That is an excellent point. I would be in favor of furthering social regulations to include more women in the workplace, their artwork is represented at the museum exhibits, etc. There can be all kinds of incentives, such as government support to small businesses that hire women”.

At the end of this conversation, Prof. Kadercan asserted that her treatment is not entirely equal, and provides an example – a personal one.

“Both, I and my ex-husband came to the United States to pursue our Ph.D.’s in prestigious higher education institutions. Placement is a big issue in academia, and if you are a couple trying to find a job in academia, it is very difficult to be able to find jobs in the same place. The general public and our families always thought that ‘he’ should be the one finding a job first, and that I should follow, wherever he was going to move. I did not agree with that, but after I had a child, it became very difficult to pursue my career goals. Therefore, I had to follow him. The idea that I should follow my ex-husband, triggered a chain of events that put me in a disadvantageous position. And, it became much more difficult for me to land a tenure-track job in years to come. I was not the only female professor experiencing this problem at grad school. I had many female friends, who have experienced similar issues in the United States. So, although both men and women have the same thirst for knowledge or the same ambition, women have not always been given the same opportunities to pursue their goals. I learned it the hard way. Also, I am the first woman hired as a full-time faculty in thirty years in my department. I am very proud of that, but it is also a sad fact when you think about it – that all women who were hired were part-time professors in the past”.

To briefly give temporary closure to this long thread of issues and thoughts around it. The postmodern society has not reached satisfying levels of equality, and even though we celebrate March 8th, we have accomplished far less than what should have been done in the past decades. Not only that the equality in academia essentially dispersed, but we came far from protecting the areas, like humanities, in which these individuals made significant contributions in the past. How can we even think that we are living in a postmodern society, when we have not resolved so many issues, like hunger, illness, and protection of basic human rights, and more importantly, should we, in fact, re-start from here?