Dr. Dragan Kujundzic is a Professor of Jewish, Germanic, and Slavic Studies. He also holds affiliated appointments and teaches in Film and Media Studies, European Studies, as well as Religion. Since 2016 he is a visiting professor in the Graduate School in Philosophy at the European University (NGO) in Sankt Peterburg, Russia. He holds a Ph.D. Degree in Slavic Studies with an emphasis on Critical Theory from the University of Southern California in Los Angeles. Before joining the University of Florida as the chair of Germanic and Slavic Studies in 2005, he was a director of Russian Studies at the University of Memphis, and the University of California at Irvine, where he was also a founding director of the International Center for Writing and Translation. Kujundić is the author of over one hundred and twenty articles in critical theory, deconstruction, and literary criticism, published in fifteen countries and translated into eight languages. These articles have been presented as invited lectures at leading universities in the United States, and numerous others in Europe, in journals such as Modern Language Notes, diacritics, Discours Social/Social Discourse, Critical Inquiry, Quarterly Review of Film and Video, Discourse, Russian Literature, Labyrinthe, Revue des Etudes Slaves, Nuova Corrente, @ objet petit a, Wiener Slawistischer Almanach, Tolstoy Studies Journal, Filozofskij zhurnal, Novoe literaturnoe obozrenie, Neprikosnovennyj Zapas, Seans, Artmargins, Tympanum, Social Identities, Letopis Matice srpske, Zbornik za Slavistiku Matice srpske. Since 2012, he has served as Chair of the International Editorial Board of Interculturality, at the Institute for Culture of Vojvodina, Novi Sad, Serbia. He has edited over twenty special journal issues, article clusters and volumes, including Deconstruction, A Merry Science (1985), Khoraographies for Jacques Derrida on July 15, 2000 (2000), The Other Europe and the Translation of National Identity (2001), Who or What Jacques Derrida (2008), tRaces: Derrida With Balibar (2011), and two volumes on J. Hillis Miller: J (2005) and Provocations to Reading (with B. Cohen, 2005). He was the founding editor of Bakhtinsky sbornik in Moscow, Russia, and edited two volumes of the journal (in 1990 and 1992). His other publications include the monographs Critical Exercises (1983), The Returns of History (1997), Tongue in Heat (2003), and Out of Interculturality (2016). In recent years, Dragan Kujundić has started producing and directing documentary films, together with critical and theoretical works, books, or journal clusters related to them, to perform a corpus of theoretical-mediatic installations. The First Sail: J. Hillis Miller (2011) has been released together with the book about the film (Kujundić, Hillis Miller, et. al., 2015); Cinemuse: Selfie With Sokurov has been screened, among other venues, at the international film festival Message to Man, Sankt Peterburg, Russia (October 2016) and was accompanied by lectures and publications of the film transcript and essays about Aleksander Sokurov in English and in Russian. Frozen Time, Liquid Memories (2012), a film about the Holocaust in Serbia and France, has been screened internationally, as well as at the National Holocaust Memorial Museum in Washington, DC, with accompanying publications related to this film. He is currently filming Play It Again: Sam Weber, along with writing essays about his work, and is the co-translator from French into English of an essay about Weber by Jacques Derrida (2016). His other work in progress includes a new monograph, Cinetaphs. Encryptions of East and Central Europe in Film and a film about the rock group Leningrad: Pushkin With Shnurov in Digital Age: Leningrad at 20, to be released in Spring 2017, together with lectures and a publication of related essays. In recent years Dragan Kujundić has taught courses such as the Other Europe, Deconstruction and Critical Theory, Vampire Cinema, Eisenstein and Disney, Dostoevsky and Nietzsche, Religion and Media, Introduction to Jewish Studies, Jewish and Jewish American Cinema, Russian Jews, Screening Literature and Shakespeare, and Jewish Critical Theory. 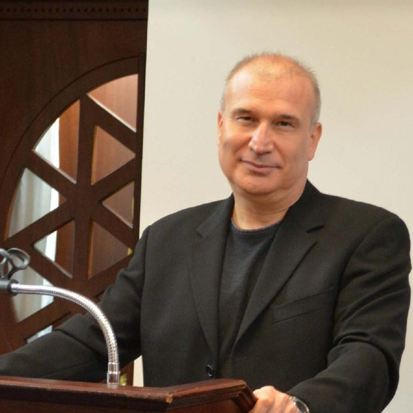